An alarming percentage of the population doesn’t get enough sleep. It’s no secret that a human body needs solid 8 hours of sleep (some can get away with it with just 7.5 h). However, on average we only sleep about 6.8 hours. It’s not just about the amount of sleep that’s concerning, the low quality of sleep is alarming as well. It can ruin our health and it’s actually making us fat.

A study published in Annals of Internal Medicine showed that “[sleeping] less than seven hours per night can reduce and undo the benefits of dieting.” But how, you ask. Well, the majority of your dieting efforts are undone by:

Not good, huh? No, not at all. The same study showed that sleep-deprived people lose their fat at a 45% slower rate that those that are well-rested.

Imagine a set of twins. One only got a few hours of restless sleep and the other one is well rested. When they pass a pizza stand, the sleep-deprived twin loses control. Even though he’s on a diet, he cannot resist. In contrast, his brother has no problem saying no to greasy, yummy pizza.

Like Examine puts it: “It seems [...] brain [...] responds more strongly to food when sleep-deprived.” You may know this from your own experience and it’s true: when we lack sleep, we crave particularly fatty, high-calorie food. (source) In a single day, a sleep-deprived person can eat 1000 more calories than a well-rested one. The worst thing is, they don’t even know it. It’s an impulse. It’s the way our bodies compensate for the lack of energy.

While junk-food cravings may be a survival instinct, the other explanation is that “fat is a stress reliever for the tired brain” as Examine.com stated. In addition, one study (source) showed that we crave more saturated fat when we’re tired. If you’re already overweight, this can be very damaging to your heart health.

Even though that slice of pizza or a single scoop if ice-cream won’t ruin your diet on their own, it’s the frequency and the bad timing that will do it. One study (source) showed that sleep-deprived crave caloric, fatty food late at night. They just can’t help it.

It’s a vicious cycle, really. . . The later you eat, the worse you’ll sleep because digestion will keep you up at night. And the less sleep you get, the more you’ll crave food late at night. Eventually, you may give up on your weight loss attempt because results just won’t come.

Like one (source) of the many studies nicely puts: “There’s a wealth of evidence to suggest that sleep deprivation is associated with obesity.”

Fatty liver and adrenal fatigue are just the consequence

The food is not the only issue. Our bodies tolerate occasional bad decisions quite well, provided we’re healthy, have a liver in great shape and are not consumed by stress. Unfortunately, our cortisol levels spike when we don’t get enough sleep. (source)

This slows down our natural fat burning process and can burden our liver so much, that it starts encasing itself in fat.

Up to 60% of the general population has fatty liver. Well, low-quality sleep (or lack of it) is a huge contributing factor. With fatty liver and increased cortisol, losing weight in a healthy way is virtually impossible.

Put your weight loss struggles to rest with NightBurn

We’re truly happy for you if you’re sleeping like a baby, but the sad fact is, most of us are sorely lacking sleep. The modern way of life just doesn’t support our basic needs anymore. Studies have shown that our bodies show signs of sleep deprivation after as little as three nights of bad sleep.

But there’s a silver lining. Since we’re the weight loss experts, we got your back! Our fat burner drink specialists developed the only fat burner you can drink at night – the NightBurn.

NightBurn will help you in many ways:

Try our NEW fat burner – the one slimming drink you must take at night. Order now and put your weight loss struggle to rest. 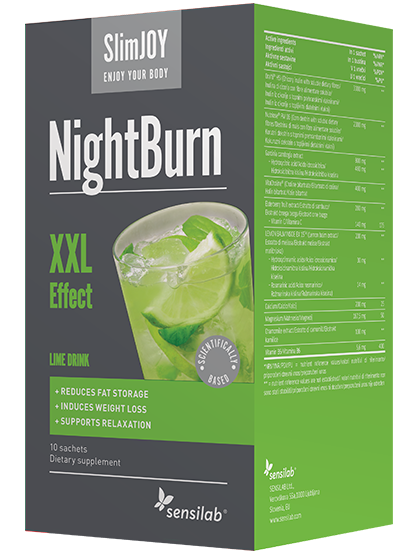